Story poles have been erected on the south side of Agoura Road at the western end of the city. They show the outlines of the proposed senior apartment project, "The Park at Ladyface Mountain Senior Apartments." The proposed project will be heard by the Planning Commission on Thursday, September 1, at 6:30 P.M. at City Hall.


We have some concerns about the use, size and density of this project, located at the base of Ladyface Mountain.The project consists of two three-story buildings with a total of 46 apartments and a separate 3,004 sq. ft. senior recreation center. The buildings are 34 feet in height, right up against the road. . There is a total of 104,138 sq. ft. of building on 7.1 acres. The project requires an amendment to the Ladyface Mountain specific plan to allow a residential use. It also requires multiple variances to reduce front, side and rear yard setbacks and to increase the height of retaining walls.

The story poles give Agoura Hills residents a good opportunity to visualize what the project will look like before the Planning Commission makes its decision. The height of the buildings and their proximity to Agoura Road are of particular concern, since they require a variance. The height of the retaining walls is also a concern, since they also require a variance. The project also requires the removal of 30 oak trees and encroachment into the protected zone of 35 oak trees. In addition, the applicant is requesting two monument signs instead of the one which is allowed.

We urge you to take a ride on Agoura Road to see the story poles and determine whether you believe that this is a reasonable plan for the foot of Ladyface Mountain. If you have concerns, please take the opportunity to send them to the Agoura Hills Planning Commission at City Hall, with a request that they become part of the report that the Commission will review before making its recommendation.
2 comments:
Email ThisBlogThis!Share to TwitterShare to FacebookShare to Pinterest


Evidence of a black bear in the Santa Monica Mountains was discovered Tuesday by National Park Service employees. The researchers were reviewing photos from two camera traps set up in Malibu Creek State Park to monitor for wildlife movement and came upon images of the mammal dated July 26. 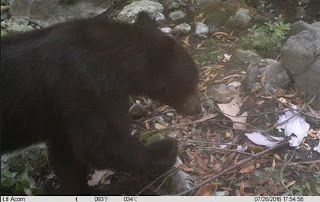 The Santa Monica Mountains have not had a resident bear population since the 1800s, when grizzlies were extirpated from California. Since then, black bears have settled in the mountains bordering the north end of Los Angeles, including the Santa Susana and San Gabriel Mountains, but it is extremely rare for a black bear to be found south of the 101 Freeway.

National Park Service researchers will be checking camera traps around Liberty Canyon, where the wildlife crossing in Agoura Hills is proposed, to see if the bear may have crossed there.

“Malibu Creek State Park is over 8,000 acres of open space and is connected to a much larger network of habitat,” noted Craig Sap, district superintendent for the Angeles District of California State Parks. “If this bear decides to stay, let’s see what we can do to co-exist with it.”

The California Department of Fish and Wildlife offers tips on co-existing with bears at https://www.wildlife.ca.gov/Keep-Me-Wild/Bear.

No comments:
Email ThisBlogThis!Share to TwitterShare to FacebookShare to Pinterest
Newer Posts Older Posts Home
Subscribe to: Posts (Atom)
TO READ OR POST COMMENTS: Click on the article title to the left and scroll to the bottom of the article.
<----------