A Rural Wildlife Crossing, not a Freeway Bypass

As former Agoura Hills mayors we have always recognized the Santa Monica Mountains National Recreation Area and wildlife as part of our city’s identity and key to its semi-rural character.

Our wildlife is endangered by the barrier created by the 101 freeway. For mountain lions, this has led to inbreeding that puts their very survival in jeopardy. Many have been killed in attempts to cross the 101. As top predators, their presence maintains the balance of other species in the region such as deer, coyotes and others.

We strongly support a wildlife crossing over the freeway and Agoura Road near Liberty Canyon. It will also serve as a connector from the ocean to the inland mountains for hikers, bikers and equestrians. Construction will be funded with private grants, although Caltrans and other agencies have partnered in design and environmental studies.

At the October 26 Council meeting, city staff commented on a design all other parties, including Caltrans engineers, environmental scientists and cycling enthusiasts, approved. Staff recommended a larger, 64-foot wide overpass with more impacts, including oak tree removal and disturbing a natural stream. This used standards for a “primary freeway bypass,” not our two-lane rural road through protected open space and wildlife habitat.

We oppose widening Agoura Road beyond the city's General Plan -- a maximum of 48 feet wide. Any plans the city has for adding sidewalks or bicycle paths in this rural area are unrelated and should be deferred. Building out Agoura Road as a freeway bypass will create a commuter shortcut with higher speeds, jeopardizing wildlife and the peace of adjacent neighborhoods.

After hearing public concerns, we were pleased with the Council's direction for staff to work with the overpass design team and return with a project consistent with the actual need and General Plan.

This matter has rested with the city for months; fundraising and other "next steps" have stalled. We ask the city to support the 48-foot option before the end of the year so there is no further delay. As with all formal environmental review processes, there will be future opportunities for comment.
No comments:
Email ThisBlogThis!Share to TwitterShare to FacebookShare to Pinterest

In addition to the announcement that the Mountains Recreation and Conservation Authority (MRCA) had acquired the Chesebro Meadow, Joe Edmiston, Executive director of the MRCA, also announced that the Meadow was now to be officially named "Fran Pavley Meadow."  The Meadow, a significant part of the Liberty Canyon Wildlife Corridor, is a fitting tribute to retiring State Senator Fran Pavley. Fran, the first Mayor of Agoura Hills, leaves a legacy of environmental accomplishments and leadership that has left an impact locally, statewide, and on the entire world. 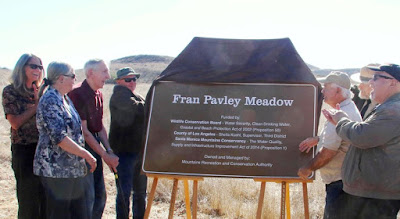 Our heartfelt Congratulations and Thank You, to our first Mayor, our retiring State Senator and our incomparable friend, Fran Pavley.
No comments:
Email ThisBlogThis!Share to TwitterShare to FacebookShare to Pinterest

Former mayor and State Senator Fran Pavley announced this morning that the California Wildlife Conservation Board (WCB) approved a grant of $3.35 million in voter-passed Proposition 50 funds, completing the $7 million purchase price for the acquisition of Chesebro Meadow, a key parcel on the east boundary of Agoura Hills. 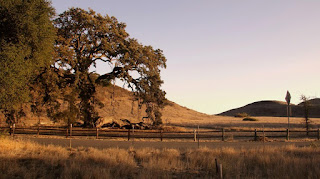 Long sought by environmentalists as a critical component of the wildlife connection between the Santa Monica Mountains and the Simi Hills, this grant now insures that the wildlife overpass of the 101 freeway, currently in the planning stages, will have the best possible chance of success.

“The property will be acquired to protect the Malibu Creek watershed and to provide key connectivity for the wildlife corridor,” said Senator Pavley. “And we have a willing seller, which was critical for this acquisition.”

We cannot overstate the importance of the role that Senator Pavley played in bringing all the parties together and assembling highly-competitive funding sources. Without her relentless efforts over the past year, it is far from certain that this property would have been saved from development. WCB Executive Director, John P. Donnelly, noted that a letter of support was also received from Agoura Hills’ Mayor, Harry Schwarz.

This puts the City of Agoura Hills one step closer to having a wildlife bridge and fulfilling our city’s identity as “Gateway to the Santa Monica Mountains.”
1 comment:
Email ThisBlogThis!Share to TwitterShare to FacebookShare to Pinterest

If You Build it, They Will Come 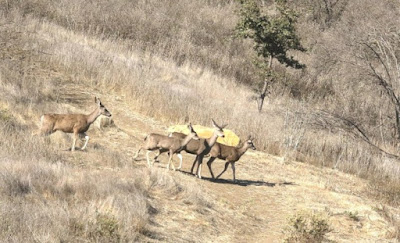 Family of mule deer coming down from the Santa Monica Mountains to Agoura Road to feed on acorns dropped by oaks along the creek. Their path was precisely where the planned Liberty Canyon wildlife crossing of the 101 freeway will be located. Both preservation of oaks and protection of the creek are at issue under one option currently being debated at city hall . We will be posting a more detailed update and some concerns next week. Watch for it.
No comments:
Email ThisBlogThis!Share to TwitterShare to FacebookShare to Pinterest
Newer Posts Older Posts Home
Subscribe to: Posts (Atom)
TO READ OR POST COMMENTS: Click on the article title to the left and scroll to the bottom of the article.
<----------
"Something will have gone out of us as a people if we ever let the remaining wilderness be destroyed." Wallace Stegner