NOTE: This meeting is being conducted utilizing video conferencing and electronic means consistent with the Governor’s State of California Executive Order N-29-20, dated March 17, 2020, regarding the COVID-19 pandemic. The live stream video and indexed archive of the meeting(s) are available on the City’s website at agourahillscity.org by clicking on the “Watch Meetings Online” button. In accordance with Executive Order N-29- 20, the public may only view the meeting online and/or by television; public attendance in the Council Chambers will not be permitted. The live stream video can be viewed the night of the meeting via Zoom or on the City’s website (link above).

THE CITY OF AGOURA HILLS HAS SCHEDULED A PUBLIC HEARING FOR THE CITY COUNCIL TO CONSIDER AN APPEAL OF THE PLANNING COMMISSION’S DECISION TO DENY THE AVE PROJECT APPLICATION. YOUR ATTENDANCE AND COMMENTS ARE WELCOME AT THE HEARING. APPLICANT: California Commercial Investment Companies CASE NO: AVDP-01161-2015 and VTTM No. 73881 LOCATION: Southeast Corner of Agoura and Kanan Roads (AIN 2061-031-020) ZONING DESIGNATION: Planned Development (PD) (Agoura Village Specific Plan) REQUEST: Consideration of Appeal of the Planning Commission’s denial of the AVE Project, involving an application for an Agoura Village Development Permit (AVDP), including an Oak Tree Permit, to construct a mixed-use development of 45,235 square feet of retail/restaurant space, 3,765 square feet of office space, a 70,000 square-foot 120-room hotel, 1,370 square-foot residential community building/clubhouse, and 118 dwelling units for multi-family residential use with associated amenities, parking and landscaping; and appeal of the Planning Commission denial of a Vesting Tentative Tract Map to subdivide a single parcel into seven parcels. ENVIRONMENTAL DETERMINATION: Exempt from the California Environmental Quality Act (CEQA) per Public Resources Code §21080(b)(5) and CEQA Guidelines §15270 (Projects Which Are Disapproved). REVIEWING BODY: City Council (by Video Conference) DATE OF HEARING: Wednesday, September 8, 2021 TIME OF HEARING: 6:30 P.M., or as soon thereafter as the matter may be heard LOCATION OF HEARING: Note: In-person attendance will not be permitted City of Agoura Hills Civic Center - Council Chambers 30001 Ladyface Court Agoura Hills, California 91301

PUBLIC PARTICIPATION: All interested parties are cordially invited to participate in a Public Hearing either by submitting written public comments by email or participating live at the meeting using Zoom. To submit written public comments, please include “Public Hearing” in the subject line and email to comments@agourahillscity.org by 4:00 p.m. on Wednesday, September 8, 2021, and your comments will be distributed to the City Council prior to the meeting. To participate live at the meeting, access the meeting remotely via Zoom. To access the live Zoom meeting, use the Zoom link, Meeting ID, and Meeting Passcode listed on the agenda on the City’s website at www.agourahillscity.org. To request to speak during public comment, please click the “Raise Hand” button on the Zoom toolbar. Public testimony is limited to three (3) minutes per speaker. A speaker’s time may not be transferred to another speaker. Information relative to the specific request is available for viewing during normal business hours at the City of Agoura Hills, Planning Division, 30001 Ladyface Court, Agoura Hills, CA 91301. The staff report for this item will be available on Friday, September 3, 2021 on the City’s website at www.agourahillscity.org. For further information concerning this case, please contact Allison Cook, Assistant Planning Director, at (818) 597-7310 or at acook@agourahillscity.org. Kimberly M. Rodrigues, MMC, City Clerk City of Agoura Hills Date Published and Posted: Thursday, August 26, 2021 In compliance with the Americans with Disabilities Act, if you require special assistance to participate in this meeting, notify the City Clerk’s Office, at (818) 597-7303, at least 48 hours prior to the meeting. 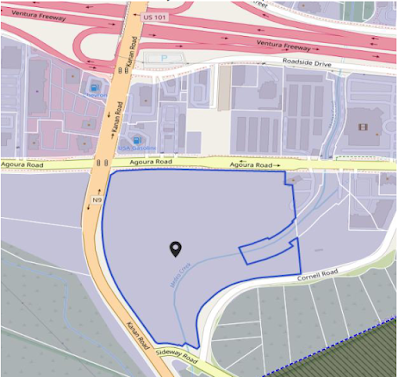 Re:      Redistricting Community of Interest

We write to you as former mayors of the City of Agoura Hills, a member city of the Las Virgenes/Malibu Council of Governments (“COG”).  This is to express our strong support for the inclusion of the COG cities of Agoura Hills, Calabasas, Hidden Hills, Malibu, Westlake Village, and the unincorporated area from Topanga to the Ventura County line in one Community of Interest (“COI”).  There are many compelling reasons which support this determination.

2)    The unifying geographic feature of these five cities is their location at the foot of the Santa Monica Mountains National Recreation Area.  Coordination among these entities during wildfires, earthquakes, traffic challenges, and other emergencies is essential to coordinate a safe and prompt response and allow communication and evacuation to proceed in an orderly fashion.  Numerous homes through this entire COG area are rural and keep livestock.  Many of the roads are narrow or steep.  This area creates a unique set of challenges.

4)    The area Is dependent on four major state and local highways: the 101 freeway, Pacific Coast Highway, Topanga Canyon Boulevard, Malibu/Las Virgenes Road, and Kanan Road, all with unique regional challenges.  Accordingly, it is important to underscore the geographic implications of our road configuration as a COI.

-       Travel eastward to the City of Los Angeles involves taking the 101 freeway over the Calabasas grade.

-       Travel westward to Simi Valley is only possible by travelling east to Topanga Canyon Boulevard or west to the 23 Freeway in Thousand Oaks.

These are long circuitous routes, especially during peak am/pm commuter hours. Those who live in our area do not feel any more connected to Simi Valley or the City of Los Angeles than they do to Camarillo or Oxnard.  We have greater commonality with the City of Thousand Oaks and the southern part of Ventura County, all sharing the proximity to the Santa Monica Mountains NRA.

5)    The Los Angeles County Board of Supervisors established a district office for this area in the City of Calabasas over 30 years ago.  This was done in recognition of the need to be accessible to residents and businesses of the Las Virgenes and Conejo Valleys and their shared economic and community areas of interest.

6)    It is noteworthy that Los Angeles County Measure W has defined our Watershed Committee to include these areas north of the Pacific Ocean in order to protect watershed and water quality from runoff into the Santa Monica Bay.

For these reasons and others, we feel strongly that this area is a natural Community of Interest, and, accordingly, should not have divided representation on the Board of Supervisors.

Thank you for your consideration.

Former Agoura Hills Mayors, Representing the city from 1982 to 2018,