Escrow Closes on Final Phase of the Triangle Ranch

Tuesday, November 30: Today the MRCA successfully closed escrow on the 150+/- acre Phase 4 of Triangle Ranch.  Located on the southern border of Agoura Hills, the 320 acre Triangle Ranch property was the largest remaining privately owned holding in the Santa Monica Mountains and has long been an acquisition target of the MRCA and the Santa Monica Mountains Conservancy.

This concludes a multi-phased acquisition project which began in 2018.  Funding for Phase 4, totaling $11.5 million, was allocated by the State legislature to the Conservancy and through a grant from Los Angeles County and the Los Angeles County Sanitation Districts (via Calabasas Landfill Economic Recovery Fund).  Phases 1-3 were funded by a coalition of state, local, and private sources, including the Conservancy, the California Wildlife Conservation Board, Los Angeles County Regional Parks and Open Space District, City of Agoura Hills, and the Hilton Foundation.

The  first image below shows the Triangle Ranch with Phase 4 highlighted and the second image shows the west/east wildlife corridor leading to the Liberty Canyon wildlife crossing. 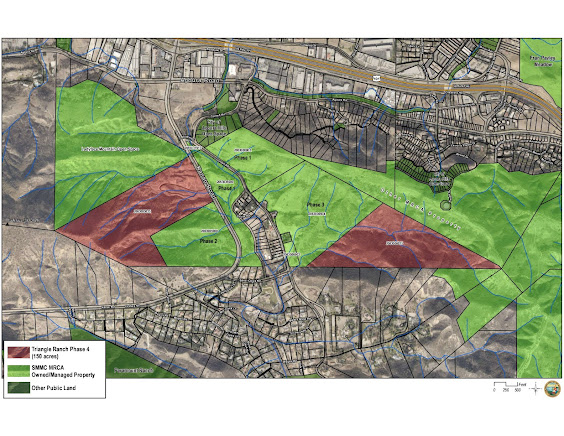 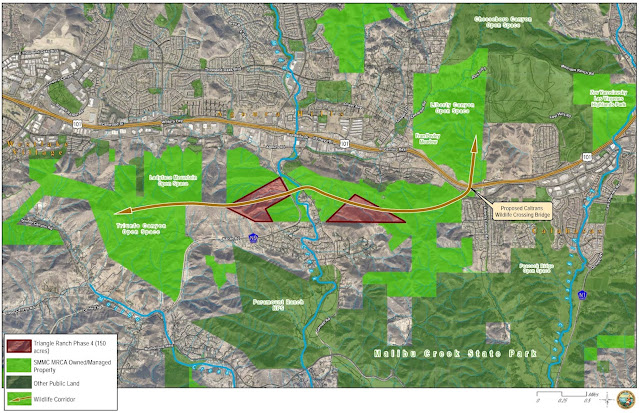