On Wednesday, February 14, the Agoura Hills City Council will discuss the possible adoption of Community Development Forums, “CDFs,” for future development projects within the city. The idea was posited by the city’s Land Use and Economic Development Committee (LU/EDC), consisting of Mayor Bill Koehler and Mayor Pro Tem, Linda Northrup. Our neighbor City of Calabasas has already adopted CDFs in April of last year.

What is a CDF? Essentially, it is a meeting that the developer is required to conduct, with the public, to present his development proposal and receive community feedback before receiving any approval of his application from the city. The city has conducted similar meetings in the past, called “charrettes,” when adopting specific plans like the Old Agoura Overlay and the Agoura Village Plan.

The staff report provided to the city council for next Wednesday night’s meeting, recommends conducting one CDF, but only for projects within the Agoura Village Plan and only as “an informational meeting” at which the public may “ask questions of the applicant (the developer).” We believe that this does not go far enough.  The Guidelines for the Calabasas CDFs describes them as “an opportunity for the public to engage with the design team and other subject matter experts, using a ‘hands on’ or ‘charrette’ style interactive design process.”

The type of project subject to a CDF should be what was recommended to the council by the LU/EDC, or similar to what was adopted in Calabasas. Further, the CDF should be held at the earliest possible date in the application process. The public should be allowed and encouraged to suggest modifications or design changes. The city staff does not have an exclusive right to do that. 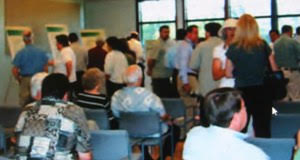 We also disagree that projects should be exempt if they meet all specific plan and zoning standards. These are minimums. The public is entitled to receive and provide early input on issues such as visual compatibility with the project’s built and natural surroundings, impact on viewsheds, density and justifications for massive grading/retaining walls, or removal of oak trees. The public is entitled to suggest realistic project alternatives.

This is a very valuable process for both the developer and the ultimate decision makers, the city council. Calabasas considers it valuable enough to require 2 CDF’s for any project subject to the guidelines. They provide the following advice to developers:

“A Community Development Forum offers an opportunity to listen to the ideas and concerns of residents and stakeholders both as you finalize your project design and during the formal application process. The public meetings may be a chance to improve your plan or make modifications that will make a big difference to your neighbors and the community’s perception of your project.”


We agree. The CDFs are not an obstacle to sound development, but a reasonable step to allow the developer and the decision makers to measure the design against the standards and expectations of the community. The CDFs can help avoid the costly appeals process, plan changes initiated in the council chambers, and worse, litigation.

Two recent city projects come to mind. Mr. Selleck’s L.A. Fitness project could have avoided the appeal and contentious meeting if he had known beforehand the resident’s objections, particularly to his sign program. To his credit, Mr. Selleck made every accommodation he could at that last stage in the process. The other project, Cornerstone, was not so compliant. The public had been shown the original Agoura Village Plan with a single building on the Cornerstone site, a restaurant with views overlooking the Village. This was the concept that was presented in charrettes, and printed up in brochures that promoted the idea of Agoura Village. They may have also seen the revised concept of a larger project on that site, but they never had an opportunity to comment or opine on the final Cornerstone plan before it made it to the decision makers for approval. No wonder that project is now in court. It bore no relation to the public expectations or standards for Agoura Village.

Adopting a rigorous Community Development Forum process will benefit residents, stakeholders, decision makers and developers in the long run. Let’s get it in place before we are faced with another Cornerstone.

Attend the council meeting, Wednesday, February 14, 6:00 PM at City Hall, or send an email to the City Council by sending to the City Clerk, Kimberly Rodrigues: krodrigues@ci.agoura-hills.ca.us
No comments:
Email ThisBlogThis!Share to TwitterShare to FacebookShare to Pinterest
Newer Posts Older Posts Home
Subscribe to: Posts (Atom)
TO READ OR POST COMMENTS: Click on the article title to the left and scroll to the bottom of the article.
<----------
"Few generations pass down the absence of things rather than the presence of things. Other generations pass along a legacy of office buildings and developments. This generation says we’ll pass along a different legacy — a legacy of mountain lions gently padding along wilderness areas." Joe Edmiston, Executive Director, Santa Monica Mountains Conservancy
"Something will have gone out of us as a people if we ever let the remaining wilderness be destroyed." Wallace Stegner