The L.A. Times has come out in favor of building a wildlife crossing of the 101 freeway at Liberty Canyon in Agoura Hills. The February 18 editorial stresses the need to preserve the mountain lion population in the Santa Monica Mountains. "These big cats essentially live on an island - hemmed in by freeways and the ocean - and their isolation imperils their long term survival."

The editorial points out that the big cats have not only been killed by automobiles, but scientists have found inbreeding in the most recent litter of cubs which imperils the health and survival of this iconic animal. The Times concludes, "It's clear that a crossing is needed to help the mountain lions survive and thrive." 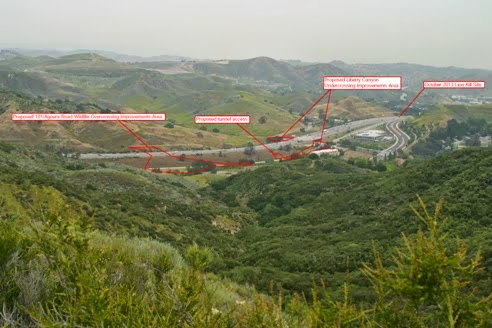 The above photo was provided by the SMMNRA/National Park Service and the graphics were provided by the Resource Conservation District of the Santa Monica Mountains. The photo shows the Liberty Canyon wildlife corridor looking north over the 101 freeway. The graphics, from left to right, show the potential locations of the overpass, the tunnel, the existing underpass at Liberty Canyon Road, and the area on the freeway where a mountain lion was hit by a car last year.
Email ThisBlogThis!Share to TwitterShare to FacebookShare to Pinterest

The momentum appear to be building to do the right thing and make the wildlife crossing we have been talking about for so many years, a reality.