Construction Forges Ahead on the City's New Recreation Center

"It fits us," says Amy Jones Brink, Agoura Hills' Community Services Director, when describing the new Agoura Hills Recreation Center now under construction on Ladyface Court above the City Hall and Library. The project is not a new development, but a renovation of buildings that once belonged to a school and synagogue. But the renovation is so extensive it could be considered all new. 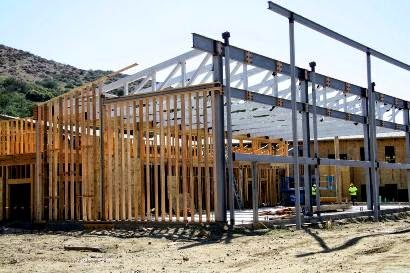 The style of the new recreation center will blend in with the Craftsman style of the City Hall and Library. Wooden beams, exposed rafter tails, natural material finishes, spectacular views overlooking the city and rooms that open to the outdoors characterize the buildings. The architecture and landscaping are consistent with the city's role as a Gateway to the Santa Monica Mountains. Or as Amy put it, "It's who we are."

Outdoor features include a trail-head for hiking on Ladyface Mountain, native low water use landscaping, an outdoor event area, and an "Interpretive Center" play area that links a children's playground with  the Santa Monica Mountains in a surprising and delightful way.  Play apparatus includes a giant climb-on snake, a mountain lion and a slide that goes underground. Interspersed with the toys are displays with information about the animals of the mountains, like cast footprints of  Bobcats and other animals. A grant to help build the Interpretive Center was provided by County Supervisor, Zev Yaroslavski.

At over 20,000 square feet, it is the most ambitious project that the City has taken on since the construction of  the Library. The buildings will include a senior center, a fitness center, recreation class rooms, an event center and, for the first time in the City's history, a teen center. The teen center will be available for kids to drop in as well as for scheduled events. The City is working with Agoura High School to program the teen center for the maximum benefit of the kids. The imaginative design allows all of these venues to function at the same time.

The Center is targeted to be opened in November or December of this year. Phase Two of the project will follow. Phase Two will focus on an Arts Center with class rooms, studios and galleries. An office for the Cultural Arts is already included in Phase One.
Email ThisBlogThis!Share to TwitterShare to FacebookShare to Pinterest