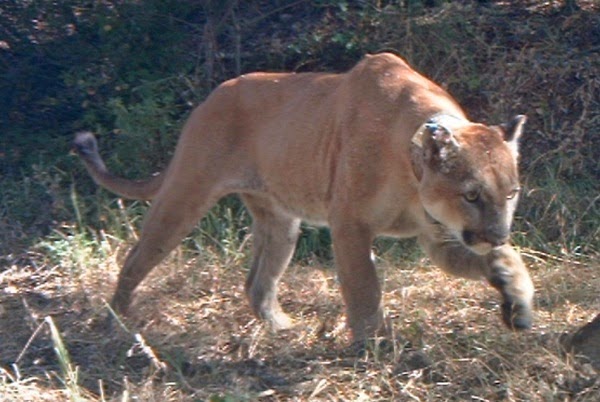 On November 20, the California Wildlife Conservation Board unanimously approved $650,000 in voter-passed grant funds to complete Phase 1 of the planned safe wildlife crossing of the 101 freeway at Liberty Canyon in Agoura Hills. This project was triggered by the recent death of a male mountain lion that tried to cross the freeway from north to south, but was struck by a car and killed. That lion would have brought much-needed new genetic material with him to

stem the inbreeding that has been documented by the National Park Service because of the barrier created by the 101 freeway that has isolated lions in the Santa Monica Mountains from unrelated other lions. The ongoing road kills of deer, coyote and other small mammals attempting to cross have made it clear that for the safety of both wildlife and of drivers on the freeway, something must be done.

Phase I will begin with Caltrans replacing and relocating fencing to keep wildlife off the freeway and force them to the improved underpass. Some adjustments to the traffic lanes underneath the freeway will create a wide dirt path that will be re-vegetated with native plants and create habitat and cover to entice wildlife to continue from the open spaces on one side of the freeway to the other.

The unanimous support from the Wildlife Conservation Board was surely influenced by the huge groundswell of support from the community. The Board noted that they received more than 60 letters/emails in support of this application – apparently a record number, so you made a huge difference!

It is estimated that the Phase I improvements will be completed by mid-2015. Phase II will then begin, which is a proposed wildlife naturalized crossing over the freeway itself just west of Liberty Canyon. These are being used with great success in other states and in Canada. A major public/private fundraising effort will be required, but the National Wildlife Federation has stepped up and will help lead that effort. In the meantime, securing the funding needed for the Phase 1 undercrossing is reason to celebrate!
Email ThisBlogThis!Share to TwitterShare to FacebookShare to Pinterest

Apparently they are simultaneously preparing to perform construction on the North West corner of Liberty Canyon and Agoura Road which I thought was one of the parcels the conservancy voted to purchase. I don't understand how we can go in both directions at once.

The office building on the west side of Liberty Canyon isn’t being purchased by MRCA and is not for sale. They are providing an easement to MRCA for the wildlife path along their northern property line, in exchange for which MRCA provides room on their adjacent parkland for the lost office building parking spaces.

I think this is a great project.

I feel that creating this wildlife crossing is a waste of taxpayers hard earned money. let nature take its own course.

The whole idea of this Wildlife crossing is to let nature take its course. This is one project that is not a waste of tax payers money - Agoura Hills is rural and we live with nature. To try and protect the way we live and the area / wildlife we live with should be a priority.