The California Department of Transportation (Caltrans) yesterday announced that the public can review and comment on the Caltrans proposal to build a wildlife crossing facility over U.S. Highway 101 (the Ventura Freeway) in the city of Agoura Hills.

The initial study and environmental assessment (IS/EA), which Caltrans issued this month, explains that the project will provide a safe and sustainable wildlife passage across Highway 101 to help reduce wildlife mortality and enhance safety for motorists by reducing motorists’ sudden movements when avoiding animals crossing the freeway. 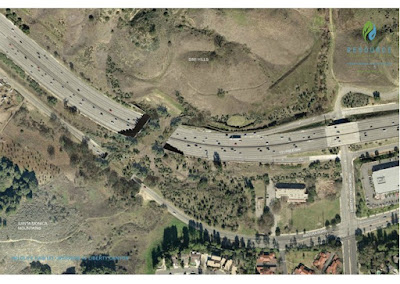 Caltrans intends to adopt a Mitigated Negative Declaration on the project, based on studies that show it will not significantly affect the quality of the environment provided that the project incorporates certain measures such as vegetation and replanting, water quality permits and post-construction monitoring.

A public hearing on the report is scheduled for October 12 from 6 to 8 p.m. at King Gillette Ranch Auditorium, 26800 Mulholland Highway in Calabasas. The public is invited to attend to learn more about the project, ask questions and provide comments as the project moves forward.

The Liberty Canyon Wildlife Crossing would be the first of its kind in California. Similar wildlife crossings have been built and used successfully in other states and countries.

Liberty Canyon in Agoura Hills has been identified as the ideal spot for a vegetated crossing to provide safe passage for wildlife across U.S. Highway 101. No public funds will be diverted from the state highway construction budget to build the wildlife crossing. The Caltrans project is being drawn up in conjunction with fundraising efforts by the National Wildlife Federation and Santa Monica Mountains Fund.

Since 1996, the National Park Service has been studying carnivores in and around the Santa Monica Mountains to determine how they survive in an increasingly fragmented and urbanized environment. During the course of the study, biologists have studied more than 340 bobcats, 145 coyotes and 60 mountain lions.

A study co-authored last year with researchers at UCLA found that without increased connectivity, especially for animals moving in from the north, this would lead to the continued erosion of genetic diversity and increase the chances of extinction of the mountain range’s population of mountain lions and other wildlife.

The IS/EA is available for review online at the Caltrans project website at http://www.dot.ca.gov/d7/projects/libertycanyon/.

The IS/EA is also available for review and reproduction at the Caltrans District 7, Division of Environmental Planning Office (100 S. Main Street, Suite 100, Los Angeles, CA 90012) weekdays from 8 a.m. to 4 p.m.

For additional information, the public may contact Ms. Susan Tse at (213) 897-1821 or via email at LibertyCanyon@dot.ca.gov.
Email ThisBlogThis!Share to TwitterShare to FacebookShare to Pinterest