At the request of the Mountains Recreation and Conservation Authority (MRCA), the City of Agoura Hills removed discussion of the Triangle Ranch from its December 13th City Council agenda. The major real estate acquisition by the MRCA has been delayed because the State rejected the appraisal at the last minute. According to sources at the MRCA, the deal is "not dead, just delayed."

In spite of being removed from the agenda, a number of people from Agoura Hills and the Cornell neighborhood south of the city spoke before the city council urging the city to assist the MRCA with a grant to help purchase the property.

CORRECTION: In our last post on this issue, November 30, we provided a link to a map of Triangle Ranch that was incorrect. The link went to a map of a different parcel. Below is an accurate map of the Triangle Ranch properties that the MRCA hopes to acquire. 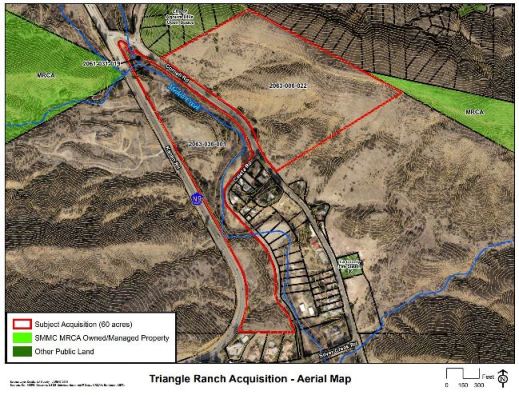 The MRCA is asking the city to help acquire the first "phase" of the property, approximately 60 acres, along the east side of Kanan Road at the entrance to the city.  Three subsequent acquisition phases would bring the total acreage to 320.6 acres of open space. After contributing to the first phase, however, the city will not have to put any more funding into the project.
Acquisition of the property will provide a broad habitat connection between the Liberty Canyon wildlife corridor and the Ladyface Mountain core habitat area that contains over 1,000 protected acres. Acquisition will protect a regionally significant viewshed along Kanan Road as one of the main gateways to the Santa Monica Mountains National Recreation Area.  The purchase will also protect 2,300 feet of Medea Creek with a broad riparian corridor and adjacent oak woodlands.

This item will come back before the Agoura Hills City Council. Watch this blog for information. 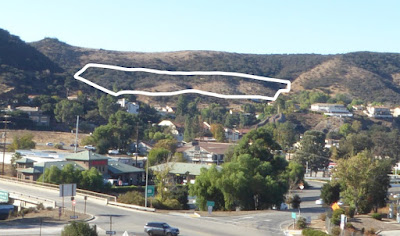 While the Triangle Ranch Acquisition remains up in the air, the city has forged ahead to acquire approximately 6 acres located south of Renee Drive, on the north side of Knight Drive and west of Canyon Way. See the photo above.This is a hilly area currently zoned as open space. The city was able to buy part of the acreage for the amount of back taxes, $165,00, while securing the balance as a donation.  The council voted 4 to 0, with Councilmember Weber absent, to acquire the land. City staff indicated that the money needed for the acquisition will "come from the sale of another city asset (land) in which the city will receive an amount nearly equal to the purchase price."