The Mountains Recreation and Conservation Authority (MRCA) announced on Monday that it had acquired 98 acres of regionally significant Santa Monica Mountains open space south of the 101 Freeway and west of Liberty Canyon Road, adjacent to open space owned by the City of Agoura Hills and the MRCA. The core habitat and trail access was permanently protected by funds granted by Los Angeles County Supervisor Sheila Kuehl and the Santa Monica Mountains Conservancy. The purchase also permanently protects viewshed that will continue to be enjoyed by thousands of motorists on the 101 Freeway every day. 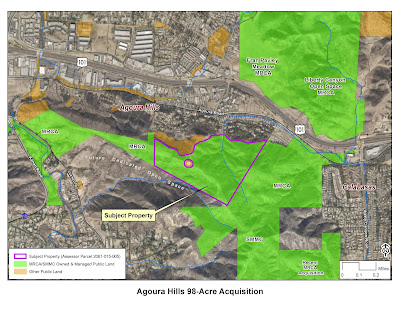 “This acquisition will create a block of 2,430 acres of contiguous public open space that is not bisected by a single paved road, including 537 acres of parkland currently owned and managed by the MRCA,” said Paul Edelman, Chief of Natural Resources and Planning of the MRCA. “The new 98 acres of open space includes the junction of the greater Malibu Creek State Park core habitat and the Liberty Canyon intermountain range wildlife corridor.”

The MRCA purchased the property with a grant of voter-approved Proposition One funds from the Santa Monica Mountains Conservancy, mitigation funds, and Los Angeles County Proposition A funds granted by Third District Supervisor, Sheila Kuehl.

“I enthusiastically support this significant expansion of open space in the Santa Monica Mountains in order to make sure that this wild and beautiful habitat will be available in perpetuity for the people and animals of LA County to enjoy for generations to come,” said LA County Supervisor Sheila Kuehl.

The new parkland permanently protects core Santa Monica Mountains habitat with prime coastal sage scrub and chaparral. The parkland provides critical linkages for wildlife and people and has good public hiking access from several locations. A USGS blueline stream courses through the heart of the property.