Conservancy Grants Funds for Purchase of Phase 4, the Last Parcel of the Triangle Ranch

At its October 18 meeting, the Santa Monica Mountains Conservancy (SMMC) awarded a grant of nearly $10 million to the Mountains Recreation and Conservation Authority, (MRCA), for the purchase of the last phase of the Triangle Ranch.The Triangle Ranch is located directly south of the City of Agoura Hills in unincorporated Los Angeles County and straddles Kanan Road. It has long been identified as a crucial linkage for habitat preservation, watershed protection, and wildlife movement in the area. Acquisition of the property has been a long-term objective of the Conservancy and MRCA. 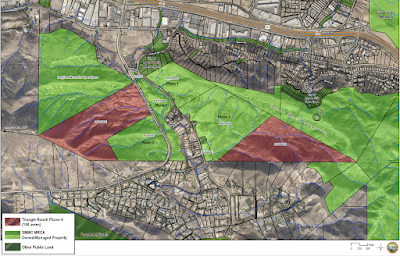 In 2018, the MRCA, with funding from the Conservancy and other public entities, successfully acquired roughly 170 acres of the privately held land. At that time, the MRCA was unable to secure funding for the fourth and final phase of the property as contemplated in the purchase agreement. Over the last several months, as the prospects of an improved State budget became likely, Conservancy and MRCA staff continued to work with the owner's on a revised, lower, purchase price for Phase 4 if funds became available. The MRCA has recently entered into a purchase agreement for this final 155+/- acre phase with the property owners.

The County of Los Angeles will soon be considering the MRCA's request for $1,428,149 from a mitigation fund established by fees from the Calabasas Landfill. The balance of the purchase price of over $11 million is being provided to the MRCA from the Conservancy's state budget allocation and an $8,000,000 set aside in the state budget requested by State Senator Henry Stern specifically for the acquisition of this final phase of the Triangle Ranch.  Special thanks are owed to Senator Stern for doggedly keeping this issue alive in Sacramento during prior periods of budget uncertainty..

It is difficult to overstate the importance of this acquisition to Agoura Hills and, really, to all of this part of Southern California. Putting the entire Triangle Ranch into permanent protected status preserves over 320 acres of habitat, keeps open a vital east/west wildlife corridor and pathway to the soon to be built Liberty Canyon wildlife crossing, protects the Malibu Creek watershed from further degradation, prevents further sprawl into a very high fire hazard severity zone, maintains the carbon sequestration provided by the undisturbed oak and chaparral woodlands and preserves the mountain views that constitute the gateway to the Santa Monica Mountains.