Visible to thousands of daily motorists on the 101 Freeway and surrounding parklands, the Cornerstone property expands the Liberty Canyon Wildlife Corridor and protects a segment of the Rim of the Valley Trail with immediate trail connections to the Santa Monica Mountains. 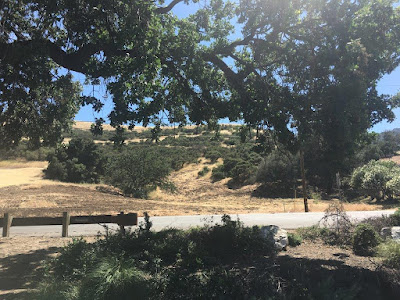 AGOURA HILLS, CA  -- The Mountains Recreation and Conservation Authority (MRCA) announced on December 30th that escrow had closed on the acquisition of the regionally significant 8.2-acre Cornerstone property on the southeast corner of Agoura Road and Cornell Road in the city of Agoura Hills. At one time approved for a development of 35 residential apartment units plus retail, restaurant, and office space, the new parkland abuts hundreds of acres of protected open space owned by the MRCA and the City including the western approach of the in-construction Wallis Annenberg Wildlife Crossing at Liberty Canyon south of the 101 Freeway.

“If you lived in the Agoura area over 40 years ago, as I did," recalled retired Assemblymember and State Senator Fran Pavley, who was the first Mayor of Agoura Hills, “you knew this environmentally sensitive prominent hill with majestic oaks, Cornerstone, because our only market and post office were located across the street at what is now the Whizin Arcade. “We voted to incorporate our community in 1982 to protect open space, native plants and oaks, and develop responsibly. We recognized our position to provide a major gateway to the Santa Monica Mountains for all people.

“Our City’s first grant was from the also young Santa Monica Mountains Conservancy. It was to begin a hiking and equestrian trail from the Cornerstone property east to Old Agoura and south towards Paramount Ranch. The Executive Director of the Conservancy, Joe Edmiston, and I—then in our 30’s—along with other local leaders—climbed to the top of Ladyface mountain and looked down at Cornerstone and the other land that we might save for wildlife and people. It is gratifying to know that public preservation of this irreplaceable open space has finally happened thanks to the efforts of many local residents, the Native Plant Society, the Santa Monica Mountains Conservancy, and the State Wildlife Conservation Board.”

After years of contention, including a successful 2020 legal challenge won by the California Native Plant Society and the local community group Save the Agoura Cornell Knoll, the now permanently protected parkland contains some of the most visually and botanically sensitive land in the area including the federally-listed Agoura Hills dudleya, the California ESA candidate species crotch bumble bee, and the Ojai navarretia as well as Coast live oak and scrub oak woodland. Majestic views, including that of Ladyface Mountain abound. Los Angeles County designated the property as part of the Santa Monica Mountains SEA (Significant Ecological Area) and the property forms part of the northern gateway to the Santa Monica Mountains National Recreation Area. 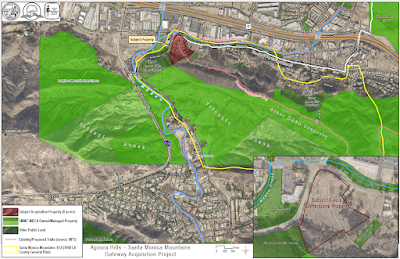 A segment of the Rim of the Valley Trail identified in the NPS Trail Plan, and LA County Regional Trail System already exists on the property and will link with the City of Agoura Hills Linear Park Trail proposal and the existing Paramount Ranch Connector Trail.

The Mountains Recreation and Conservation Authority (MRCA) is a local government public entity dedicated to the preservation and management of open space and parkland, watershed lands, trails, and wildlife habitat. The MRCA works in cooperation with other government partners to acquire parkland, participate in vital planning processes, provide natural resources and scientific expertise, and complete major park improvement projects. The MRCA manages and provides ranger services and fire protection for almost 80,000 acres of parkland that it owns and that are owned by the Santa Monica Mountains Conservancy or other agencies and provides comprehensive education and interpretation and leadership programs for youth. It is one of the lead agencies providing for the revitalization of the Los Angeles River.