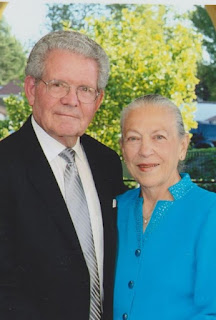 The entire Las Virgenes community was saddened to hear of the passing of Dr. Albert "Bud" Marley. Dr. Marley served for eleven years as the Superintendent of the Las Virgenes Unified School District (LVUSD), from 1984 to 1995. But his influence and impact on our community went well beyond his role as head of the school district. Bud and his beloved wife, Jacqueline, "Jackie," were notable fixtures at every significant community event and civic institution in the Las Virgenes/ Conejo region for over 30 years.  While helping to build LVUSD into one of the leading school districts in the state, Bud was also helping to build a community.

Bud's incisive intellect was coupled with a friendly, down home style of speaking that never failed to engage his listeners. Deeply caring and generously giving of their time, both Bud and Jackie will be long remembered for their contributions of time and wisdom to many civic causes and institutions in our region.

As former Mayors of Agoura Hills, each of us has had many opportunities to work with Bud and to enjoy the company of Bud and Jackie, who were inseparable until her death in 2015. We mourn his passing and extend sincere condolences to his family.

Donations in the name of the Jacqueline and Albert “Bud” Marley Boys & Girls Club can be made to the Boys & Girls Clubs of Greater Conejo Valley, 30343 Canwood St., Ste. 200, Agoura Hills, CA 91301.
Email ThisBlogThis!Share to TwitterShare to FacebookShare to Pinterest